One of a series of case studies written for bsi, for its Eurocodes Plus software product, which gives engineers, architects and surveyors faster, easier and more practical access to the complex Eurocodes construction standards. I’ve employed an informative and professional tone to detail the experience of a Eurocodes Plus user company in using the product to complete the construction of a pedestrian bridge. Case studies for standards publisher bsi.

*If no image of the finished project is available, my .pdf copyvisual or .docx copysheet is shown in its place. 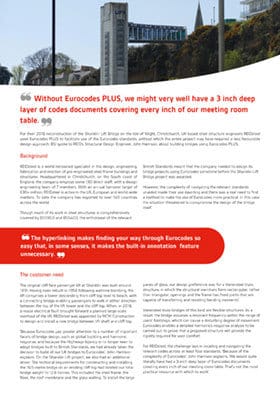 Eurocodes use made viable and more affordable.

For their 2016 reconstruction of the Shanklin Lift Bridge on the Isle of Wight, Christchurch, UK based steel structure engineers Reid Steel used Eurocodes PLUS to facilitate use of the Eurocodes standards, without which the entire project may have required a less favourable design approach. BSI spoke to Reid’s Structural Design Engineer, John Harrison, about building bridges using Eurocodes PLUS.

Reid Steel is a world renowned specialist in the design, engineering, fabrication and erection of pre-engineered steel frame buildings and structures. Headquartered in Christchurch, on the South coast of England, the company employs some 170 staff, of whom 60 or so are project engineers. With an annual turnover of £20-30m, Reid Steel is active in domestic, European and global markets.

Though much of its work in steel structures is comprehensively covered by BS5950, the  company had taken the decision to design its bridge and aircraft hangar projects using Eurocodes some time before the Shanklin Lift Bridge project was awarded.

However, the complexity of navigating the relevant standards unaided made their use daunting, in this case threatening to compromise the design of the bridge itself.

The original cliff face passenger lift at Shanklin was built around 1891. Having been rebuilt in 1958 following wartime bombing, the lift comprises a tower descending from cliff top level to beach, with a connecting bridge enabling passengers to walk in either direction between the top of the lift tower and the cliff top. When, in 2016, a major electrical fault brought forward a planned large-scale overhaul of the lift, Reid Steel were appointed by MCM Construction to design and install a new bridge between lift shaft and cliff top.

“Because Eurocodes pay greater attention to a number of important facets of bridge design, such as global buckling and harmonic response, and because the Highways Agency is no longer keen to adopt bridges built to British Standards, we had already taken the decision to build all our bridges to Eurocodes”, John Harrison explains. “On the Shanklin Lift project, we also had an additional driver. The technical requirements for constructing and installing the 16.5 metre bridge on an eroding cliff top had limited our total bridge weight to 12.6 tonnes. This included all glass, the steel frame, the floor and the roof. Because of this, our design preference was for a Vierendeel truss structure, in which the structural members form rectangular, rather than triangular, openings and the frame  has fixed joints that are capable of transferring and resisting bending moments.”

Vierendeel truss bridges of this kind are flexible structures. As a result, the bridge assumes a resonant frequency within the range of users’ footsteps, which can cause an disturbing degree of movement. Eurocodes enables a detailed harmonics response analysis to be carried out, to prove that a proposed structure will provide the rigidity required for user comfort.

For Reid, the challenge lay in locating and navigating the relevant codes across at least four standards. “Because of the complexity of Eurocodes”, John Harrison explains, “we would quite literally have had a three inch deep layer of Eurocodes documents covering every inch of our meeting room table. That’s not the most practical resource with which to work”.

Filed under Brochures Leaflets and Other Publications, Case Studies, Construction Copywriter, IT Copywriting.