One of a regular stream of posts written for Dubai based pensions specialist PWS Group. A consistent tone of expertise and authority, written in the company’s voice with an editorial style. Blog post for PWS Group.

*If no image of the finished project is available, my .pdf copyvisual or .docx copysheet is shown in its place. 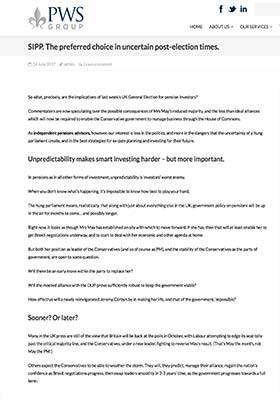 So what, precisely, are the implications of last week’s UK General Election for pension investors?

Commentators are now speculating over the possible consequences of Mrs May’s reduced majority, and the less than ideal alliances which will now be required to enable the Conservative government to manage business through the House of Commons.

As independent pensions advisors, however, our interest is less in the politics, and more in the dangers that the uncertainty of a hung parliament create, and in the best strategies for ex-pats planning and investing for their future.

In pensions as in all other forms of investment, unpredictability is investors’ worst enemy.

When you don’t know what’s happening, it’s impossible to know how best to play your hand.

The hung parliament means, realistically, that along with just about everything else in the UK, government policy on pensions will be up in the air for months to come… and possibly longer.

Right now, it looks as though Mrs May has established an ally with which to move forward. If she has, then that will at least enable her to get Brexit negotiations underway, and to start to deal with her economic and other agenda at home.

Will there be an early move within the party to replace her?

Will the mooted alliance with the DUP prove sufficiently robust to keep the government viable?

How effective will a newly reinvigorated Jeremy Corbyn be in making her life, and that of the government, impossible?

Many in the UK press are still of the view that Britain will be back at the polls in October, with Labour attempting to edge its seat tally past the critical majority line, and the Conservatives, under a new leader, fighting to reverse May’s result. (That’s May the month, not May the PM!)

Others expect the Conservatives to be able to weather the storm. They will, they predict, manage their alliance, regain the nation’s confidence as Brexit negotiations progress, then swap leaders smoothly in 2-3 years’ time, as the government progresses towards a full term.

That would mean no further election until 2022.

All that we know is that nobody knows.

What it all means for pensions.

To us at PWS, and indeed to any pensions advisor, this means that things that matter to our clients and to us, like state retirement age, state pension triple lock, social care funding and pension tax relief are all up for grabs.