completed: 2021
*If no image of the finished project is available, my presentation document is shown. 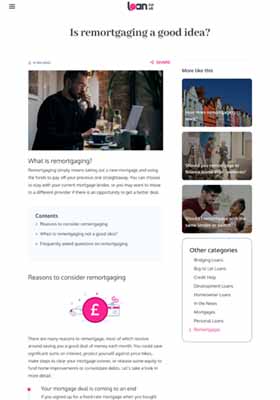 Is remortgaging a good idea?

Is remortgaing a good idea? This is one of the questions lenders and mortgage advisors are asked most frequently. Inevitably the answer is, ‘It can be. But it isn’t always”. Whether you should or should not remortgage always depends on your specific circumstances.

Remortgaging simply means taking out a new mortgage on your property and using the funds from this to immediately and automatically pay off your previous mortgage. The most common reason for doing it is to save money. Mortgage rates change regularly, and you may find better deals available than the one you have currently.

Alongside this, fixed-rate mortgages come to an end (usually after 2-5 years), at which point a lender will switch you automatically to their ‘standard variable rate’. As this may make your monthly payments significantly higher, remortgaging onto a new ‘fixed rate’ may allow you to get back to a rate similar to, or better than, you had previously.

Remortgaging is usually not the only option available to you, however, particularly when considering how best to borrow additional money to finance improvements to your property. (Second charge mortgages, for example, add a further loan alongside your existing one.)

What’s best for you always depends on your situation. So let’s try to answer some of the questions you should ask.

There are lots of reasons to remortgage. The most obvious is that by doing so you may well be able to save yourself a good deal of money each month! But whether you eventually decide to remortgage or not, it’s always smart to keep an eye on any aspect of your finances and outgoings.

If you signed up for a fixed rate mortgage when you bought your home, or have previously remortgaged to a fixed rate deal, then the term of that deal will come to an end. Fixed rate mortgages are usually fixed for between 2 and 5 years, though this can be as little as 1 year. When the fixed term ends, your lender will switch you to their ‘standard variable rate’, and leave you on that rate until or unless you remortgage with them to a new fixed rate deal, or leave them to remortgage to a fixed rate deal with another lender. The difference in monthly cost between the fixed rate you had got used to and the standard variable rate can be substantial so, in most cases, remortgaging to a new fixed rate will be worth considering.

Watch out though. If your remortgage depends on a new valuation, you may have to pay a fee to the lender for that valuation and this will cancel out some of the benefit of the lower rate.

One of the commonest reasons to remortgage is that you are currently on your lender’s standard variable rate, which is linked to the Back of England base rate, and you’re worried that the BoE will soon push up the base rate. This would be likely to make your lender increase its standard variable rate, and so make your monthly payments more expensive.

Similarly, if you’re on a fixed rate that’s coming to an end, you may be asking “Should I remortgage?” because you fear that a rate hike – an increase in the Bank of England base rate – is coming, and are concerned that this will make the fixed rate mortgages available for you to choose from more expensive than those available right now.

In either case, it makes sense to review your options, and remortgaging may well be wise.

If you’re seeing mortgage rates advertised that are significantly lower than the rate you have currently, its only natural to ask “Is remortgaging a good idea?”

If you are currently on a standard variable rate because that’s what you’ve always been on, or because you were on a fixed rate that ended, then the answer will almost certainly be that remortgaging to a fixed rate will save you money.

If you’re already on a fixed rate, however, and are thinking about remortgaging because you’ve seen lower rates advertised, you should think rather more carefully. Your current fixed rate deal may well carry a penalty for making early repayment (which is what you’d be doing were you to remortgage to a different deal, even with the same lender), and this could cancel out any saving that the lower payments on a new deal might give you.